Philip Zimbardo is an American psychologist and professor at Stanford University. He is most famous for the Stanford Prison Experiment in 1971, where he created a mock prison for students to see how prisoners are affected psychologically. He is the author of The Lucifer Effect: How Good People Turn Evil, where he talks about the Stanford Prison Experiment as well as other real-life situations that can cause a person to do evil things

“The line between good and evil is in the center of every human heart.”  Click To Tweet

The book asks the questions “How can good people become evil? How can honest people be induced to behave illegally, and moral people seduced to act immorally?” Zimbardo attempts to answer these questions throughout his book, using his own mock prison experiment at Stanford, human psychology studies, and real prisons, such as Abu Ghraib and Guantanamo Bay. The first two-thirds of the book focuses on Zimbardo’s Stanford Prison Experiment.

The Stanford Prison Experiment was conducted in 1971 using students and young adult men to act as guards and prisoners. Zimbardo wanted to study how the treatment of prisoners affected their psychology in the long term. He created a mock prison in one of the dorms at Stanford and anonymously assigned the young men to be either prisoners or the prison guards. In less than one week, the experiment had to be stopped due to ethics violations and the emotional trauma suffered by the young men. The “guards” took their roles too seriously and resorted to violence and abuse in a matter of days. Zimbardo writes about how he put together the experiment, the data collected, the results, and his acknowledgement that he could have done better as the lead psychologist on the project. However terrifying the experiment turned out to be, it’s results are still relevant to looking at real-life prisons and how good people can quickly turn abusive and sadistic.

I had a hard time getting through this part of the book because most of it is data and statistics about the experiment. I also came into the book having prior knowledge of what happens in the experiment from watching a documentary about it for a class of mine. It felt repeated to me but for someone who enjoys the data behind experiments or has no knowledge of the Stanford Prison experiment, then read the book; (it gets better later on too if you don’t like data, then you can skim the numbers like I did). It is interesting to see what humans can become capable of doing.

The next part of the book discusses topics that are studied in psychology and sociology. Zimbardo writes about social conformity, power, obedience, and dehumanization as factors leading to a good person committing evil acts. He briefly covers what each factor means and how it can affect society and individuals in general. He then goes on to analyze how it relates to his experiment as well as Abu Ghraib, Guantanamo, and genocides we have seen throughout the world. After discussing these factors, Zimbardo takes a look at the atrocities committed in Iraq in Abu Ghraib prison. American and British soldiers did unspeakable things to the prisoners such as stripping them naked and electrocuting them. Zimbardo looks at the system that allowed for this behavior to take place and points out that the system is to blame just as much as the soldiers. The system allowed for the soldiers to be anonymous, which is one factor Zimbardo says allows people to feel comfortable to do evil things if they think they can get away with it. He also discusses the trial of some of the soldiers accused of criminal acts.

I found the last section of the book to be the most interesting. I studied sociology, so seeing the factors of society in play for how people turned to commit evil acts was intriguing to me. I also had no idea about Abu Ghraib and learned many new things about the war in Iraq. Zimbardo also brought up interesting points about the International Criminal Court and how they have enough evidence to create a tribunal for the United States if they chose to. It blew my mind how little I knew about the war and what many others probably don’t know about it.

The data and statistics can be hard to get through, but once you make it past that, the book is worth the read! It has many great points about how easily someone can switch between good and evil. The book also has real-life examples that help you connect the basic psychology ideas outlined by Zimbardo with the acts committed. It’s a scary thought that with just the right amount of pressure and power, even I can do something evil. Anyone is capable of being good or evil, which is the driving point of this book; we have to fight against becoming evil. We cannot let power, obedience, or any other factors influence us to do evil things or become inactive bystanders in the face of evil.

“…every person is a hero in waiting who will be counted upon to do the right thing when the moment of decision comes. The decisive question for each of us is whether to act in help of others, to prevent harm to others, or to not act at all.” 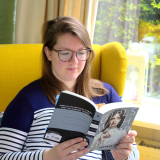 Hi! My name is Madeline Lacy and I'm originally from the United States. I have been living abroad in the Netherlands for 2 years and adapting to Dutch culture. I'm a book nerd which means I love reading and exploring bookstores around the city. I also enjoy writing, embroidery, dancing, baking, and drinking coffee in my free time.